Haller Park is an interesting place to spend a couple of hours with your family. It is just big enough for a nice afternoon of exploration. Haller Park has a redemption story behind it.

It was established at the site of an abandoned mine. Ruined and unsightly, the place did not seem redeemable at all, that is until Louis Piper and Julia Hales set out to reclaim the site.

They started by planting casuarinas trees – the only trees that would grow on limestone and brackish, salty water. The trees produced plenty of leaf fall in form of needles. The founder hauled in red legged millipedes who consumed the needles; converting them to humus and slowly creating soil.

More than a million trees were planted in the quarry once the soils improved, and today Haller park hosts many trees, flowers, animals, butterflies and other assorted bugs.

Haller Park is not just a charity project. It generates income through visitors’ fees, sale of honey and other bee products, fish farming, and sale of tree seedlings. There are many other sources of income.

Haller park was previously known as Bamburi Nature trail. The entrance fees are affordable and it is a breath of fresh air in the sweltering heat of Mombasa. The mature trees offer much needed shade.

The park is located off the Mombasa/Malindi highway.

Some of the animals you will find on the farm are crocodiles, giraffes, velvet monkeys, tortoise, fish, crocodile, hippo, eagles, weaver birds, kingfisher, kites, storks, egrets, herons, sandpipers, cranes, ibis and many other species.

Haller Park is the only park in the world where you can meet a hippo orphan who was adopted by a tortoise.

The naughty monkeys have been known to try to snatch food from visitors but other than that the experience is positive.

The park has won many awards worldwide for its efforts to create a paradise from a barren land.

The fish farm at Haller Park serves as a demonstration where local farmers come to learn more about fish farming. Haller Park produces at least 30 tons of fish every year.

The initial Casuarina trees that were planted to recolonize the limestone desert had since reseeded and grown to a massive height of 20 metres. They provided a thick layer of humus over the next 20 years and plenty of fuel. Now more than 180 indigenous trees and bushes grow in Haller Park. The herbivores like Eland and giraffe play a role of dispersing seeds and converting leaves into manure.

Haller Park is very close to the city. It is not too out of the way.

We Are Social On: 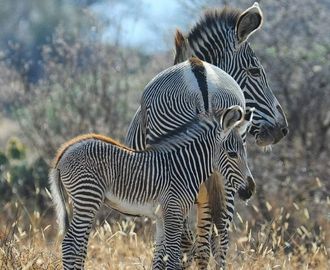 Get updates on latest safari offers

You have Successfully Subscribed!